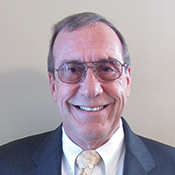 Bob Jans is former owner and President of Cook DuPage Transportation Co., Inc., Chicago, Illinois, which provides transportation to the mobility limited in the Chicagoland area. He joined the United States Air Force in 1964 and was honorably discharged in 1968.

In 1968, he became Managing Director of Pengo Henderson Ltd., which manufactured augur drilling machines in Bristol, England. Returning to the United States, he became employed at Carey Limousine, Chicago, IL and became President in 1972. Having a vision of transportation for individuals who are mobility limited, he formed Cook DuPage Transportation Co. in 1975 and successfully obtained contracts with Chicago Transit Authority and subsequently Pace Bus.

He was a member of Rotary One 1977 to 1990, and is currently a member of the Brookfield Chamber of Commerce. 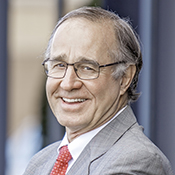 Charles Michael Shyne was born in St. Louis, Missouri when his mother, a native of the cold prairies of Saskatchewan, and his father, a Kansas farmer who joined the Navy during WWII, met at the USO in St, Louis and married.

The Shyne family lived in several locations in Missouri and Wisconsin; Michael’s father was a hospital administrator specializing in new hospital construction. But when his mother experienced the warmth of the southwest on a trip to Disneyland in 1956, the family moved to Alamogordo, New Mexico the following year.

Alamogordo’s neighbor at that time was the Air Force Missile Development Center, later to become Holloman Air Force Base. So Michael grew up watching missile launches from the school playground and enjoying jet fighters flying overhead. School field trips to Holloman were a highlight for him.

Michael began college at the University of New Mexico and was a member of its collegiate Sport Parachute Team. After receiving his B.S. in Elementary Education from Arizona State University, he returned to Alamogordo to begin a career in real estate which has lasted 44 years. Most of that time has been spent buying and selling commercial land.

Michael’s lifelong interest in historic firearms, particularly military firearms, led him to be a member of the Board of Directors of the New Mexico Military Institute’s McBride Museum. On that board he met Rogers Aston. One day Rogers gave Michael an application for an organization called “Defense Orientation Conference Association.” Rogers tried to explain this organization, but it did not make sense. Yet Michael filled out the application to join and mailed it in. In the same week in 1994 DOCA was, unbeknownst to him, touring Holloman Air Force Base just six miles from Michael’s office!

Michael’s first DOCA conference was in the spring of 1995 in Brazil. After spending a week receiving briefings throughout this fascinating country, Michael realized the unequaled value DOCA provides to its members. His take away from that first experience was that he could never afford to miss DOCA international conferences.

Since 1994, Michael has attended 75 conferences including 26 international conferences. He has served as Director and Vice President of Region Four as well as Vice President-at-large. Before DOCA, Michael thought he was a knowledgeable American. The experience he has received from DOCA conferences has proved so important that he considers his membership in the Defense Orientation Conference Association his most valuable asset.

Michael has been married to Susan DuBois Shyne for 36 years. Susan has attended 20 DOCA Annual Meetings, possibly more than any other spouse of a DOCA member. And she has enthusiastically taken advantage of the change in the organization allowing spouses to attend other conferences as well.

Michael was the founder of the Alamogordo Foundation, a 501(c)3 charitable organization which provided the first hospice to Alamogordo, run by Susan Shyne, and provided Christmas dinners for senior citizens so they would not be eating alone. The Foundation went on to support New Mexico State University Alamogordo Campus. He was responsible for firearms acquisition while on the Board of Directors of the McBride Museum at the New Mexico Military Institute. He was one of the two founders of the Alamogordo Forum and the original director of its Military Group, a civilian organization working to expand military activities at Holloman Air Force Base and White Sands Army Missile Range. He is a member of the National Firearms Act Trade & Collector’s Association and a life member of the National Rifle Association. He has been a private pilot for 35 years, enjoying the magnificence of New Mexico panoramas from the air.

One of the never-ending benefits of membership in the Defense Orientation Conference Association is the fine group of men and women Michael and Susan have met while attending DOCA conferences throughout the country and around the world.

OFFICERS AND BOARD OF DIRECTORS